The keycap campaign - Part 1: How it started

If you recognize the above screenshot then you probably already know why this campaign was launched!  In 2015 a keycap campaign from "Phase5" was launched on Indiegogo.  I, like many others, backed that campaign because of the Dallas C64C cases going into production.  I wanted clear keycaps to match my clear cases.﻿

After many years of waiting for keycaps to materialize, I made an offer to the campaign owner to purchase the backer list and take over the project.   The very day (Apr 8, 2019) that I did this a new update (which is also still the last update) was made on that campaign's page, promising the keycaps were coming - and a message was sent to me that if I even thought about making keycaps that he would release the keycaps... wait.. what?  Yes, it was a threat to release the keycaps if I decided to make my own keycaps!  I thought - ok... please release them!  I had been chatting with many people about making keycaps.  My concern was that if I personally invested in the tooling costs that this guy might actually release the keycaps and then I would be stuck with something no longer needed and out a lot of money.  After some conversations with many members of the retro community, and some nudging by people like Eric Hill (www.amigalove.com), I decided that the only way I could do this would be to create a competing campaign of my own, providing a financially safe way to move forward just in case Phase 5 came through.

I then spent the next 6 months doing research on how best to re-create the keycap shapes, and exploring the various methods of production (single-shot vs. double-shot), printing methods, etc.   I contacted companies in the U.S. and in China.  I got dozens of quotes.  The best quote I got in the U.S. for producing the keycaps was about $220,000 for the tooling.  WOW!  I would have to sell keycap sets at $500 per set, and I would need to sell almost 800 sets to pay for the tooling and plastic/printing costs!  I got reasonable quotes from companies in China, and so I focused on using only a company that had experience making keycaps.   I decided to use a company that made PC gaming keyboards.  They made the entire keyboard, from the housing to the individual keycaps.  My choice was made in early October of 2019 and contract with that company was drafted.

Over the last 20+ years I have had various plastic injected parts made for me, but these had always been original designs that I had created from scratch.   Never have I had to replicate an existing plastic part, so this was new ground for me.  At this point I focused on just how well I could re-create the keycap shapes.  Commodore of course didn't design the keycap shapes.  These shapes came from an existing typewriter, circa the early 1970's.  I have a 3D scanner and I did some experiments with it to see just how accurate the scanning process could be.  I knew that if I could get the basic shape to be correct that I could build a 3D model in Solidworks and use the scan as a shell and adjust the 3D model to match that.  This is what I did initially and that worked really well, but I soon found out that I couldn't just remove the "shell" like I thought I could!  This is one of those little mysteries in the 3D modeling world where meshed bodies and solid bodies do not mix.  I was not too concerned because I knew that someone could figure out how to convert or merge meshes - but this turned out to be a real nightmare!

Matter and Form 3D scanner used to scan each shape

In early November 2019 (more than a month before launching my campaign) I started chatting with Dan Tootil, who offered to help do some rendering of the keycap shapes and shared what he had been working on.  Dan's Blender created models we close, but their shape and size were off a bit from the scans I did.  I worked with Dan and we got his models very close to the original shapes.  I was able to attach my 3D models to his models, and I could also check everything against the original scans.  After much work, and enlisting the help of many people for doing mesh conversions, I was finally able to generate usable individual 3D models.  At that point I was able to create the stem inside of the hollow keycap body.  It should be pointed out that there are only 4 different basic shapes (profiles) that make up of all of the 66 keycaps.  Rows 1 through 4 can have different width keycaps, but each row has an identical profile in shape, length, and height.  Unfortunately, you just can't take the small size 'main' keycap and stretch it to become a wider keycap.  Each different type of keycap had to be hand made.  There are a total of 10 different shapes: Row 1, Row 2, Row 3, Row 4, F1, CTRL/RESTORE/F3, F5, L-SHIFT/R-SHIFT/F7, RETURN, and SPACE BAR.   So, the 66 keycap set is made from the 10 different keycaps. 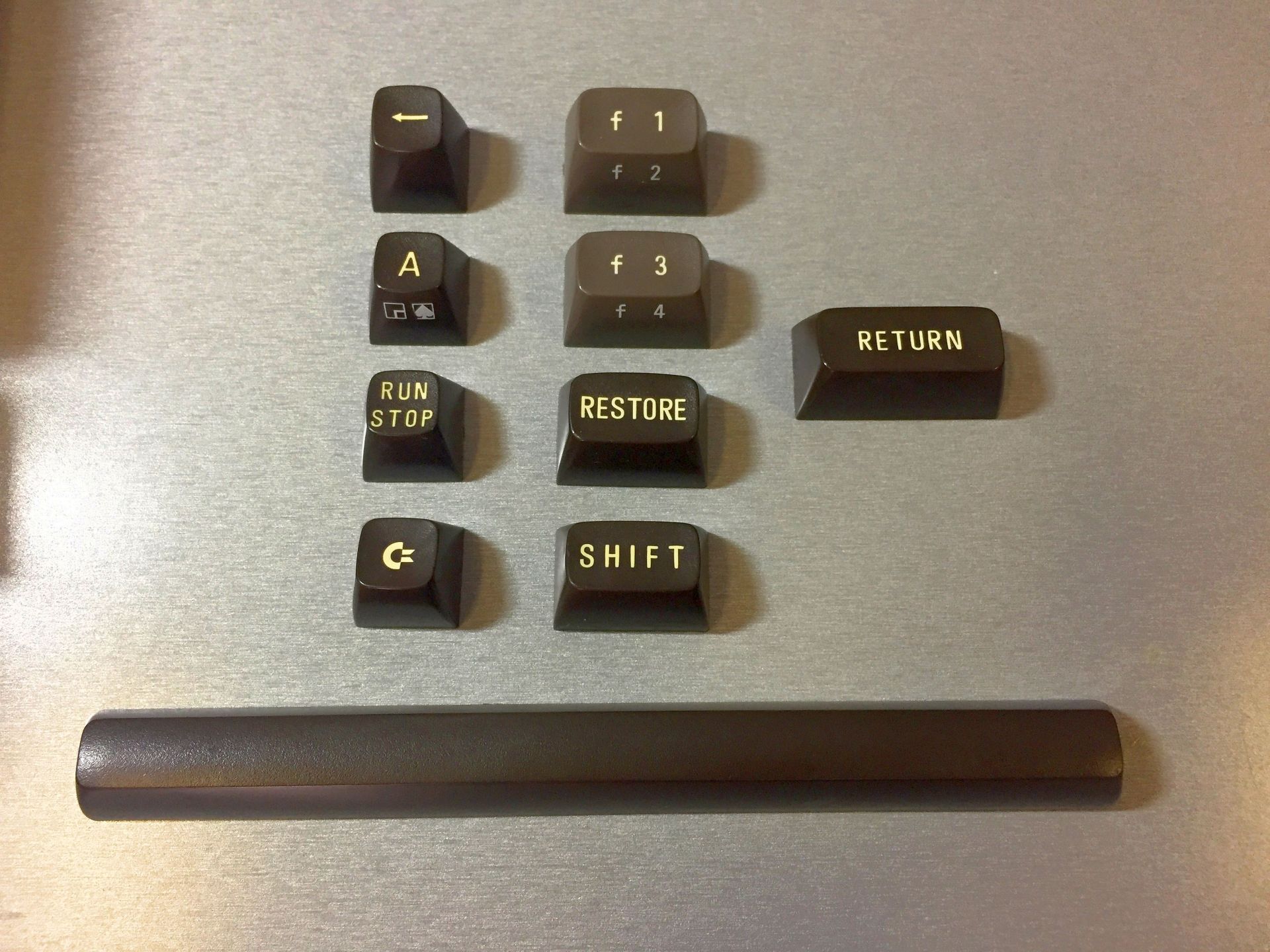 The 10 different shapes that make up the 66 keycap set

Once the keycap models were created, I started making samples using my 3D resin printer.  Making the keycaps with clear resin allowed me to "see inside" of the stem receptacle so I could check the depth and placement of the internal locks.  I made a LOT of samples over a several week period.  During that time I also started working on creating the campaign video.